Okay, so its only developing 27.2 hp but what a fun little machine it is…..and oh so pretty!! 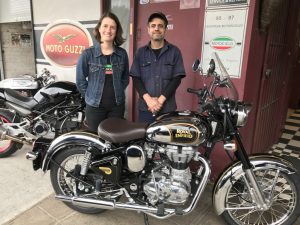 Feels as sold as a rock to ride and certainly not a sports machine but you can doodle around on it all day just smelling the roses.
I rode it out of Sydney in Friday afternoon peak hour traffic but once on the south west distributor it was clean sailing at 60 mph all the way home to Mittagong.
I arrived into town just in time for a few ales at the Lion Rampant Hotel with the boys who all rushed out to see my new acquisition. They had to wear their sunglasses looking at all that chrome!! ((-:
I’ve been asked to revisit the idea of a Royal Enfield dealership here in Mittagong so I will look at it again. John and Nicole at Motociclo in Sydney said it would not be a problem for them which I was worried about, so go for it. 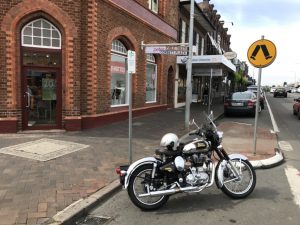 But first things first…..I have a LOT of projects already in front of me. But somehow, one thing seems to lead to another!!
Phil
Filed under: Highlands Classics Blogs